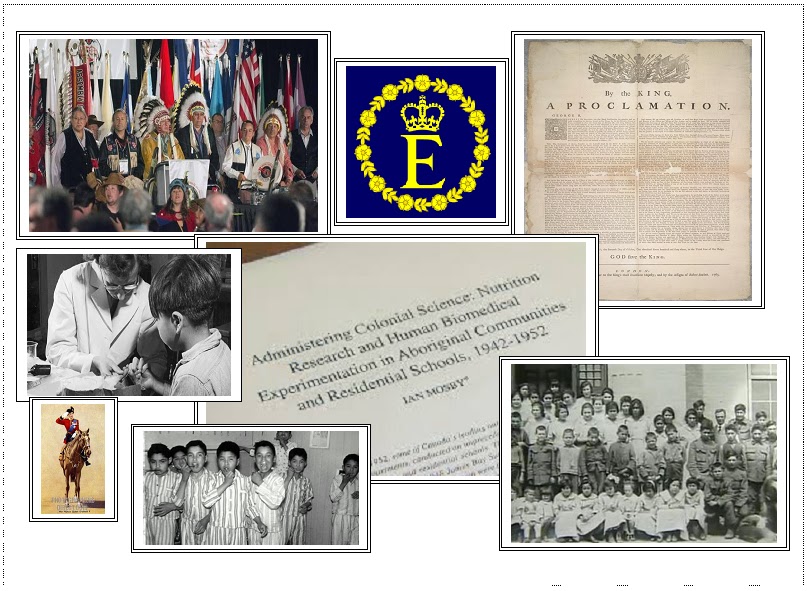 Note : Evident Absence Of Legal Proficiency And Merits In This Submission Are Caused By Specific Impact Of This Alleged Illicit Military Occupation; Wherein, Access To Competent Legal Counsel Of Choice As Provided By A Largesse Of Relevant Case Law [i.e., Airey v. Ireland; Dietrich v. Queen; Gideon v. Wainwright]. The Monarch Elizabeth II And Agent State Canada Have Specifically Denied Funding For Qualified Legal Counsel To Prepare This Brief. The Monarch and Agent Canada Have Seconded All Access To The Original Entitled Assets and Wealth Of This Applicant.

RESPONDENTS SHALL BE JOINT AND SEVERAL; NAMELY: ELIZABETH II; THE UNITED KINGDOM; GREAT BRITAIN; ENGLAND; CANADA PARLIAMENT AND LEGISLATURES; INCLUDING, BUT NOT LIMITED TO : SUPREME COURT OF CANADA; LAW SOCIETY OF CANADA AND PROVINCIAL LAW SOCIETY MEMBERSHIPS; AND, UNIVERSITY LAW SCHOOLS : PRINCIPAL ISSUE : ILLICIT CROWN CANADA, ET AL, SUPRA, CLAIM TO GOVERN; TO ISSUE LAW DEGREES; TO PROCLAIM STATUTES PROHIBITING THE PRACTISE OF LAW IN ABSENCE OF A LAW DEGREE ISSUED BY THE NAMED STATE AND /OR PROVINCE; THE ABOVE ALLEGEDLY BEING CONTRARY TO THE PREVAILING, PARAMOUNT, NON-ABANDONED, NOT ACQUIESCED GOVERNING RIGHT OF TURTLE ISLAND NORTH ORIGINAL INDIGENOUS PEOPLES; INCLUDING, BUT NOT LIMITED TO KWA'MUTSUN NATION OF COAST SALISH QUW'UTSUN TRADITIONAL AND CUSTOMARY TERRITORIES SINCE BEFORE TIME. SERVICE UPON RESPONDENTS, SUPRA, HAS BEEN DELIVERED BY WAY OF SUBMISSION TO CROWN AGENT SUPREME COURT OF BRITISH COLUMBIA IN 2013; AND, NOTICE UPON MONARCH HAS BEEN INDIVIDUALLY SUBMITTED, RECEIVED AND RESPONDED TO IN 2005. ALL MATTERS HAVE BEEN COPIED TO THE UNITED NATIONS AND HAVE BEEN RECEIVED.

Including, but not limited to: alleged illicit military occupation since before 1867; including - since the 1953 modern era Monarchical Coronation Oath - without specific UN Security Council authorization; causing, by apparent intent or specific neglect [Human and Civil Rights], the physical, sexual and substantial emotional abuse of 1000s of children under the state duty-of-care [Nuremburg Principles]; therein, impacting upon the fundamental human rights of these said children and their birth parents; with public documents revealing that official government policy has historically been to extinguish these said indigenous Peoples, their culture and traditions in apposition to the specific sworn burdens of the monarch and state to protect and preserve in justice and mercy these said indigenous Peoples customs and traditions; and, fundamental human, civil and political rights, so help them God. Noteworthy is the UN Convention On The Rights Of The Child; Universal Declaration Of Human Rights; Papal Bulls Inter Caetera and Romanus Pontifex; UN Declaration On The Rights Of Indigenous Peoples; and, the UN Declaration Of Civil And Political Rights; War Crimes And Crimes Against Humanity - (1)(2)

In Canada, in excess of 25% of the prison population is native / indigenous / Original / aboriginal Peoples [men and women] - while these Peoples account for less than 1% of the 32-million Canadian population. In some provinces, these indigenous Peoples represent circa 80% of the prison population. First was genocide by poisoned blankets and shirts; next was Indian Residential and Day School victimizations; then, denial of access to habitat on registered reserves; now, prison without access to legal counsel funding. 60,000 Day School victims are currently included in the 2009 Class Action launched in Canada against the Crown. 1900 lawyers in Canada failed to properly advise Indian Residential School Victims [IRSV] seeking compensation of equitable settlement rights with comparable non-indigenous victims who generally received 10 times the IRSV victim settlements; and, the matter of the Stockholm Syndrome did not appear to be an advisement factor from legal counsel- who received fee payments from the Crown Canada, as well as taking in excess of 43% of the IRSV settlements.
In this year 2013, on August 19th, Kwa'mutsun Nation Peoples, within the paramount sovereign authority of the Executive Branch through Letters Patent by Royal Prerogative of the Head of State Stitumaatulwut Hwuneem the following Declaration is issued to the Security Council of the United Nations in New York; wherein, per the UN Charter provisions to the Security Council, the UNSC Chair may receive this said Declaration from the UN Secretary General; and, therein, include this Declaration and Information to the Security Council members for sessional determinations on these matters of :

(a) CSQQN Allegations against Elizabeth II, the United Kingdom; and, Canada for breach of this UN Charter
(b) CSQQN petitions that the UN Credentials Committee shall consider this information brief that Canada is not entitled to be a recognized nation state or country according to international law standards; i.e., not being founded upon acceptable principles of law; namely, not possessing legal authority to create the province of British Columbia; therein, trespassing upon the customary and traditional Kwa'mutsun Peoples lands and consuming resources for profit in absence of legal capacity in the Coast Salish Quw'utsun Kwa'mutsun governed lands; therein implementing occupation military and commercial-for-profit strategies contrary to the vested and entrenched paramount CSQQN rights - including, seizure of lands and resources; and, continuous programs of harm to children that have continued to this day since before 1871; wherein public records have established the deaths of many thousands of these indigenous children in an evident campaign to divest the indigenous population of safety, security and title to lands and resources;
(c) With an included submission to the International Criminal Court to examine the public record of this alleged illicit military occupation by Elizabeth II and the United Kingdom upon this Applicant Kwa'mutsun / Quamichan State Nation and its citizenry as constituting a war crimes campaign by individuals and the said states, as defined by the UN Declarations within its Charter; and, prevailing upon its member states; members; and permanent missions. 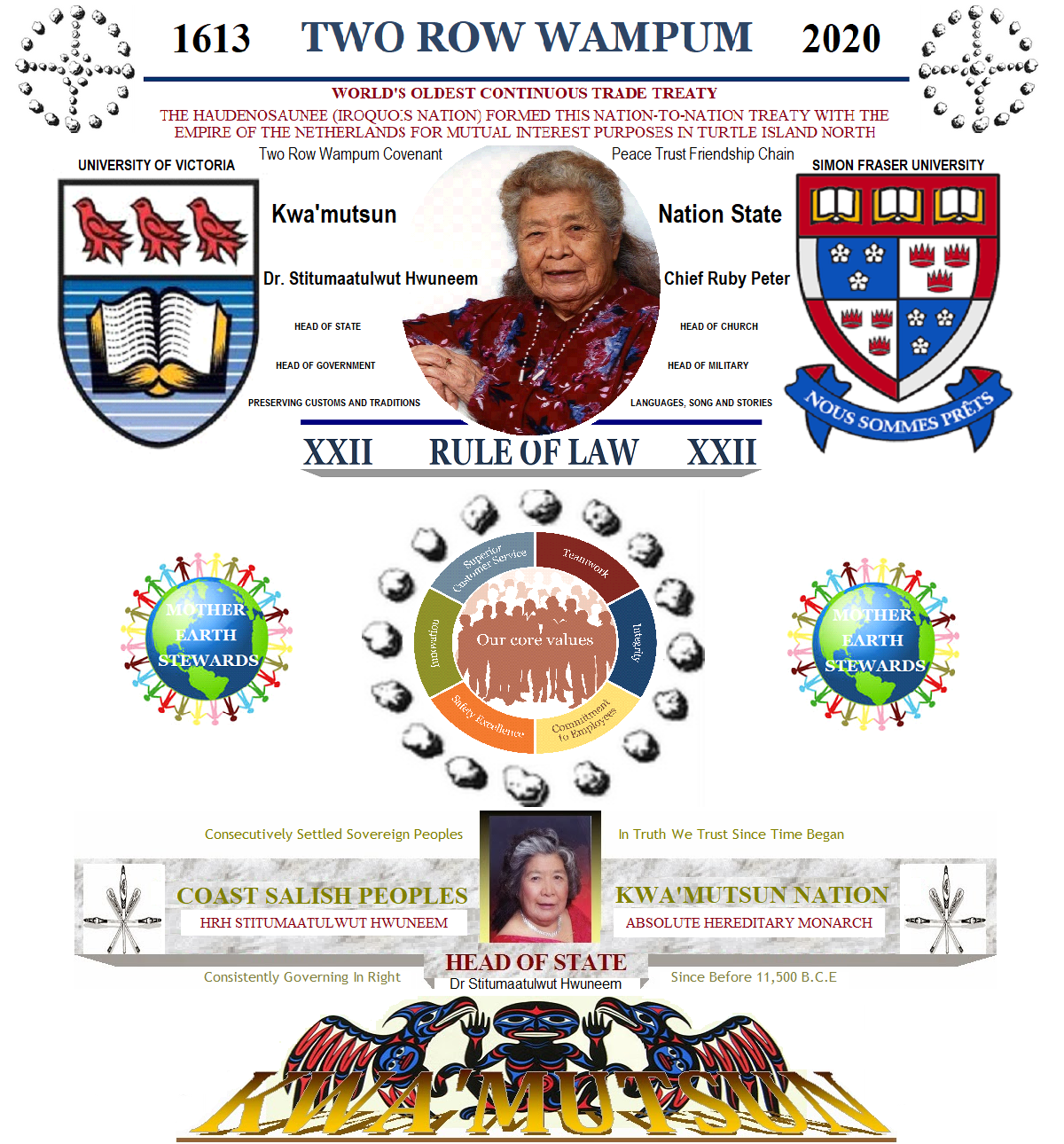 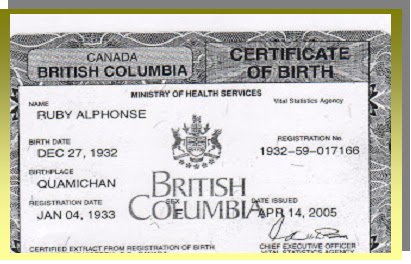 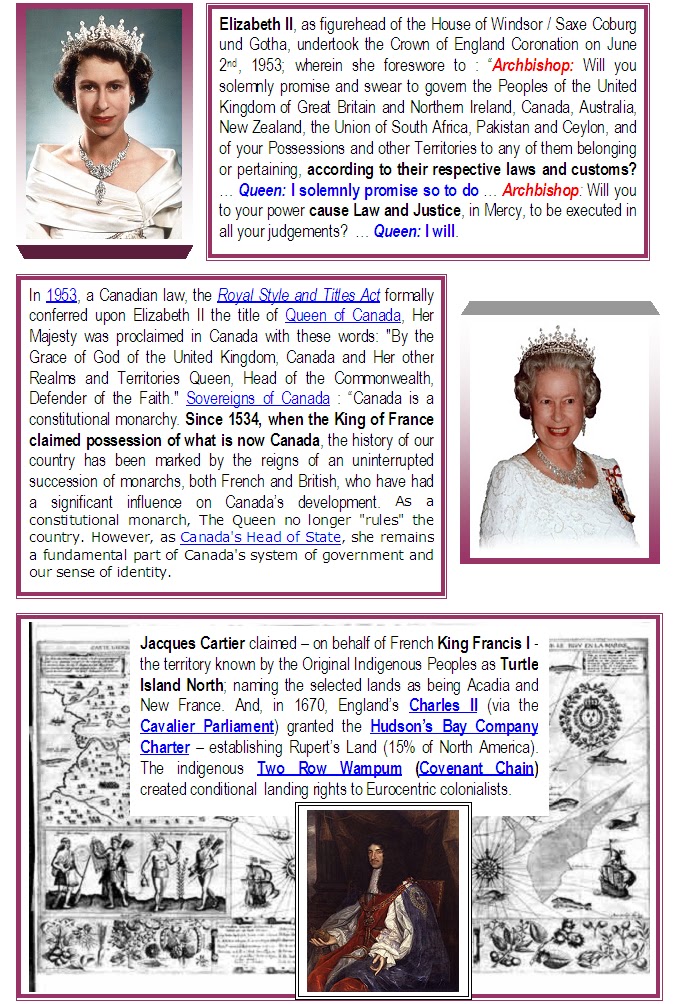 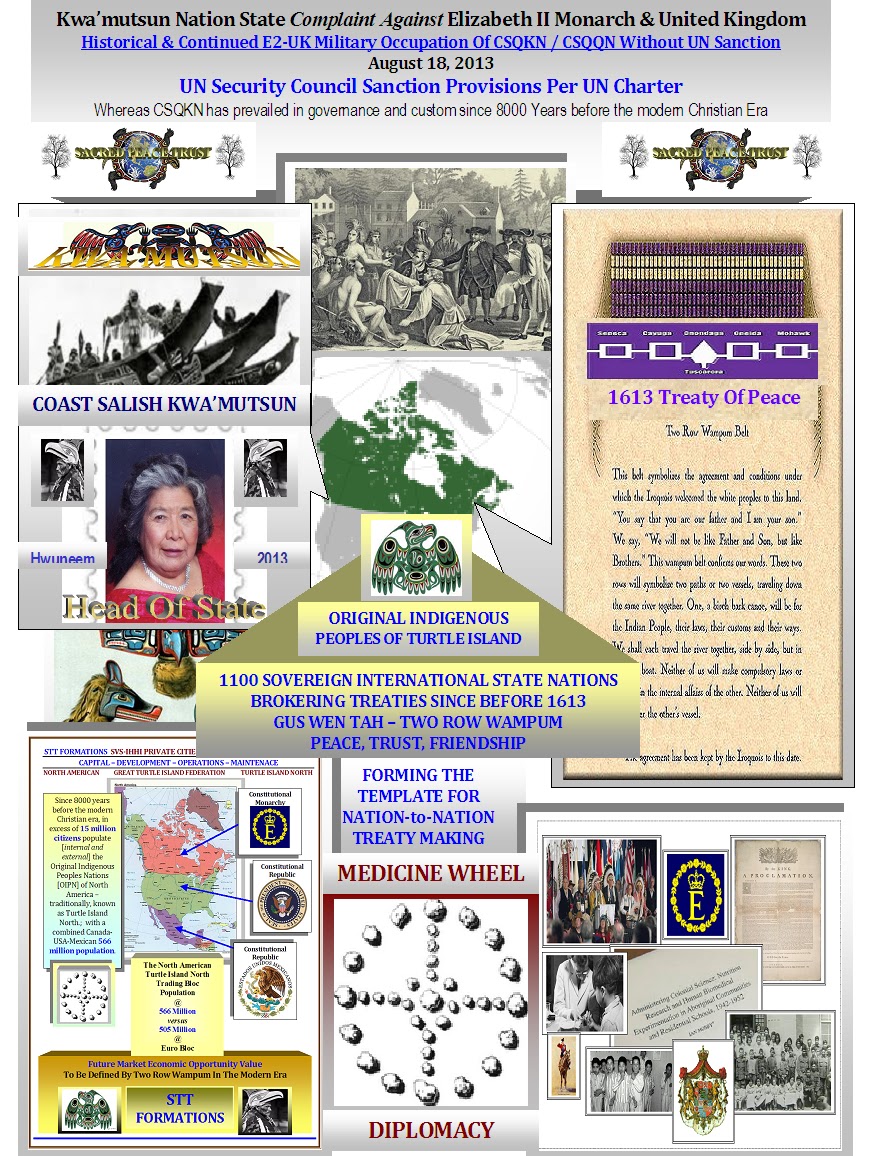 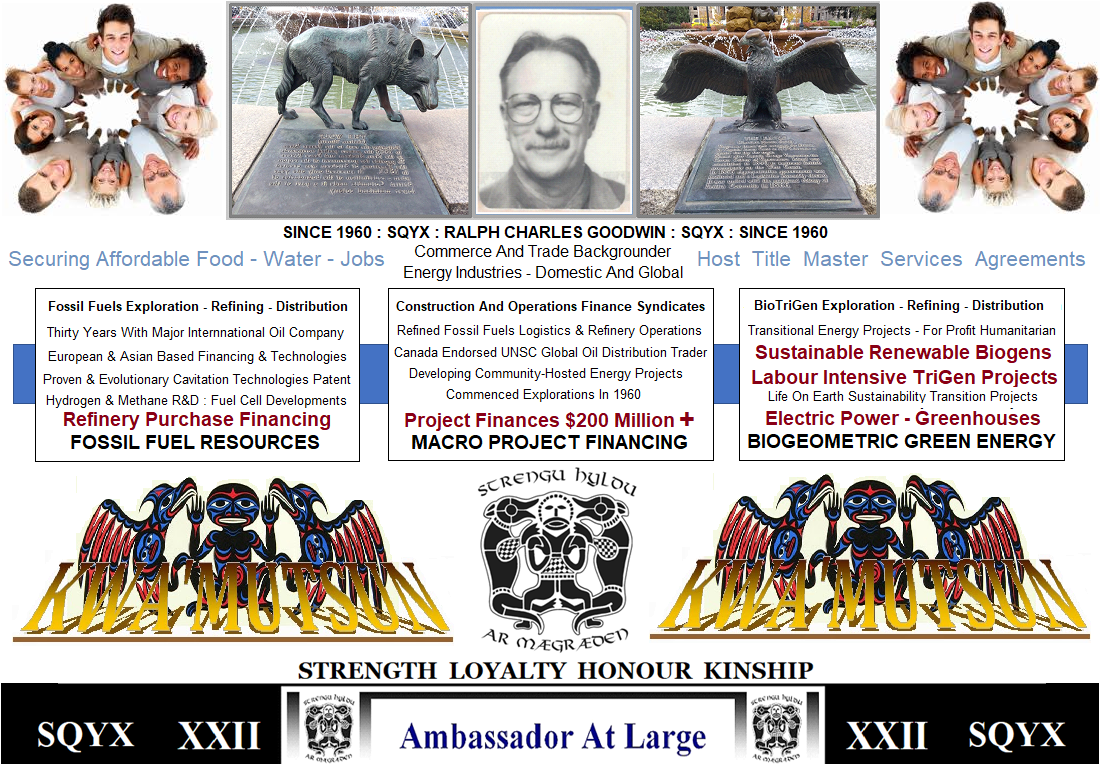 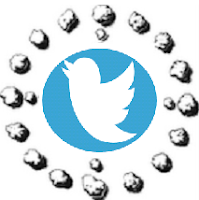 WITHOUT PREJUDICE : NOT LEGAL ADVICE; NOR, A DIRECTIVE TO LEGAL COUNSEL. POLITICAL COMMENTARIES ONLY : ERRORS AND OMISSIONS EXCEPTED
SINCE TIME BEGAN : salus populi suprema est lex - the right of the people is the supreme law : IN TRUTH WE TRUST
- 30 -